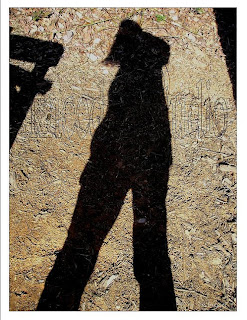 I've spent some time over the past several weeks working with some photographs, altering them so that they often look nothing like the photograph I actually took.  Here is the first photo I worked with... it's one that I took a couple years ago and saved because I knew I would eventually do something with it.

I did some experimentation in my photo program and a design program, and then simply worked with a variety of changes and layers to create the new altered look.  These changes took hours of sitting in front of the computer, sometimes deleting what I'd done, sometimes starting over, but always working and working to get the right look that I wanted. When I felt pretty good about how things were looking, of course I saved my files and began listing them in my Kneedeeporiginals on Etsy shop.  Here are a couple of the altered photos I made from this original shadow photograph... which is me, by the way, taking a picture of my shadow.

﻿
Here are some other photos and their alterations.
This coathanger with waterdrops became a Raven and Heart photograph.

And then it became these birds...

﻿This photo was taken at Chateau Morrisette Winery... chinese lanterns under their big outdoor tent.  I turned it into something entirely different.

﻿
And this flower petal, in a heart shape, fell to the ground and became yet one more bird image.

You can find all these images and more in my Etsy shop by following this link.  Until next time, make the most of your reality and if you can, find ways to make it better!

Holy smokes... we've had our chickens since April, watching them grow from tiny little fluff balls living in our closet to tiny chickens moving into the chicken coop to sizeable pullets roaming around in our garden.  Today they became laying hens! 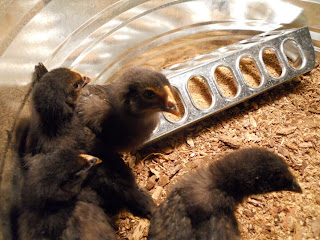 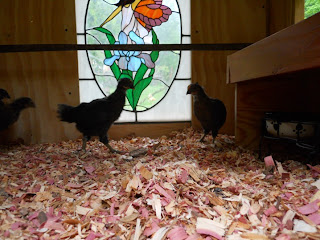 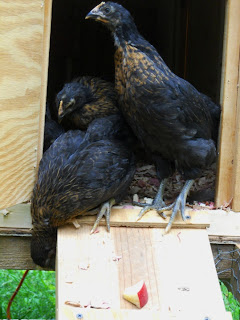 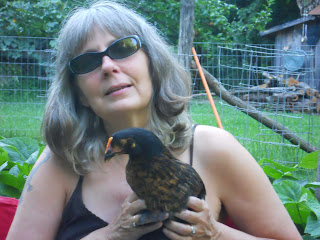 We've been waiting for the past 6 weeks for an egg to appear, and I'd just about given up hope, thinking they wouldn't lay until next spring... but today, I went out in the drizzling mist to let them out of the coop, give them their morning snack, and fill their bowl inside the coop with grain and mash.  When I opened the side door, wowza... there sat a beautiful egg in the corner, large and brown and just waiting for me to reach in and grab it.  Oh my gosh...was I ever excited!  So was John, who, after admiring it, cooked it for his breakfast.

This evening, we went out to the garden, as we usually do, to let the chickens out to stretch their legs and peck around, carrying our glasses of wine and the dinner I'd fixed for the girls.  John had been gone for most of the day, making damascus steel with his knife-making buddy, and he'd brought home some guacamole and chips from our favorite Mexican restaurant.  We took that with us, and we had to shoo away the chickens who thought they were entitled to a share.  After a while, I saw Lucy go into the coop, but she didn't come back out.  I poked my head in, and she was laying in the corner in a little burrowed out area, so I knew what was happening.  I was beside myself with excitement and curiosity!  I kept peeking in through the stained glass window, trying not to disturb her.  Alice, however, wasn't worried about disturbing Lucy, and she marched up the ramp and went into the coop.  We have never heard such a ruckus from our chickens.  Lucy got up fom her nest in the corner and barked at Alice, who promptly hurried out and scrambled down the ramp.  A little bit later, Lucy came out, and John and I looked in the side door, and there was a brand new egg.  It was still warm to the touch.  I'd been wondering how long the entire event took... about 30 minutes, give or take.  So Lucy came out into the yard, wandered around a bit as if to say, "Okay, I've laid my egg... now where's my supper?"  I got the hint and gave them their snack of persimmons, shredded potato, mushrooms, pizza crust, and corn and mash.

What a day... one to mark on the calender!  This was a first for me, and I'm quite excited about it.  I'll be having that egg for breakfast tomorrow.

Until next time, enjoy what you have, sing a little song, and let the good times roll!
Posted by Rebecca at 7:04 PM 7 comments:

I have been busy busy busy with music events, family visits, a craft show, and other projects, and I have been ready for a little down-time.  So today I decided to relax by spending some time on the computer, catching up on things, looking at some shops I haven't seen in a while, window-shopping so to speak, and gathering ideas for holiday gifts. I also decided to respond positively to an invitation to join the Etsy Treasury Team and I made my first ETTeam treasury...  YooHoo... Christmas is Coming! 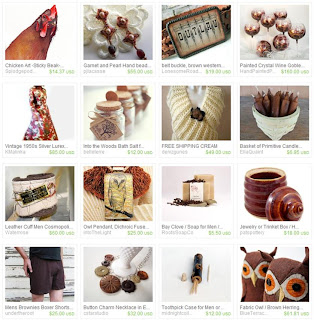 ﻿In light of my window-shopping, today I want to share some wonderful, affordable gift ideas by Etsians whose work I have purchased and can personally vouch for.
For the dog-lover on your list, these wonderful little treat bags by thedoghouse make great gifts.  I use mine on a regular basis because my pups expect treats at various locations on our walks around the mountain. Those are two of our dogs in the second photo here. 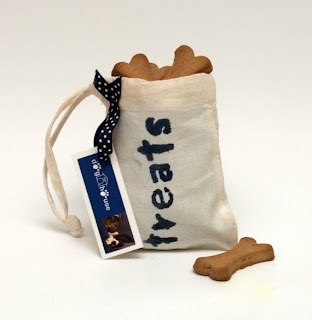 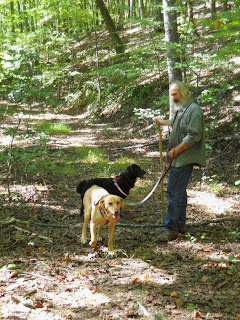 For the bird-lover or chef on your list, here is a fabulous idea: handmade potholders by PineNeedleDesigns﻿.  I have a set of these in my kitchen, and I truly love using them.  They have wonderful designs and are well-made. 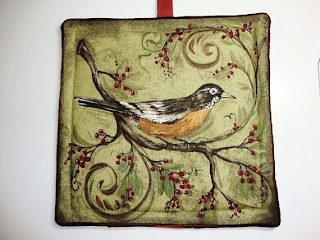 For the seamstress or crafter on the list, DorothyDomingo makes gorgeous clay buttons as well as other lovely ceramic pieces.﻿  I purchased some bird buttons for one of my favorite wool sweater-coats, as seen in the second photo, and I've received lots of compliments. 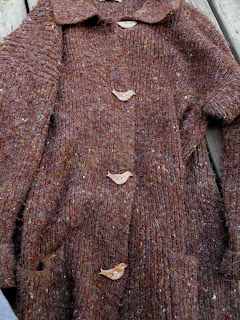 For teachers, co-workers, favorite cashiers or bank tellers, here is a simple little gift that is unique and useful: fabric and leather key fobs by GimCarry.﻿  Everyone who received one of these from me last year truly loved it.  And it won't empty your wallet either! 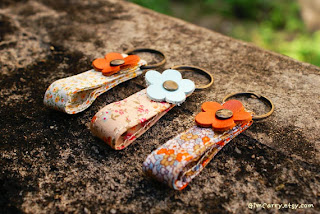 For the bicyclist on your list, or for anyone who enjoys a good t-shirt design, darkcycleclothing creates some great stuff!﻿  I bought one for my son, and he loves it. 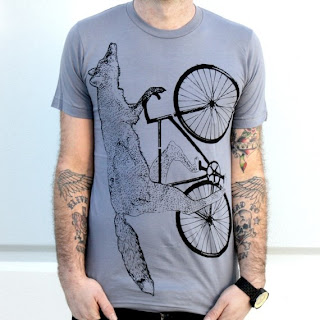 For the eco-minded grocery shopper on your list, ohlittlerabbit creates some lovely produce bags. I bought these for two of my grown children last year.  There are many design choices and they're made so well. 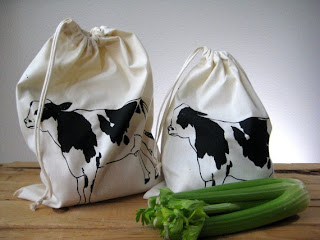 If you have a writer or journalist on your list, phofun sells lovely handmade journals, photo albums, and more. I purchased two of these, one for my daughter and one for myself, for my songwriting.﻿ 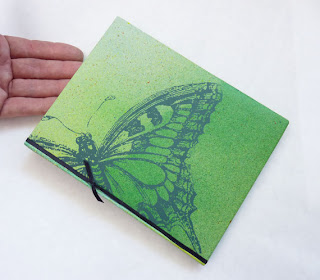 Gadget pouches by KaraMiaSofia are perfect stocking stuffers or gifts for anyone with cell phones, cameras, or ipods.  I have one myself and it's beautifully made with lovely fabric that's bright and easy to spot when your counter or desktop is cluttered. 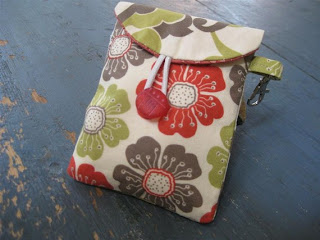 And finally, vegan laundry soap by showertreatsoap is perfect for anyone on your list... and it's so much better for your clothes and for you.  It's all I'll use, and I highly recommend it.﻿ 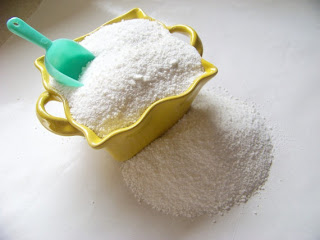 ﻿
﻿﻿I hope you've found something here that might be perfect for someone on your list. If not, feel free to look in my Etsy shop or any of the many, many shops on Etsy.  Just remember to buy handmade and support artists!
Posted by Rebecca at 4:31 PM 9 comments:

Rebecca
Painter, beader, singer/songwriter. Nature girl at heart... always have been, always will be. Love the mountains and live near them, surrounded by woods and forest. Love solitude, am an introvert. But I get out of my "little heaven on earth" when I volunteer weekly with an adult literacy student and when I visit the local nursing home and sing with the old folks, and also, of course, when I play music out, either as a solo act or with my band, The Ramshackles. I definitely feel a spirit greater than any one of us when I am in the woods or in my garden or making the lives of others just a little bit better and easier to bear.